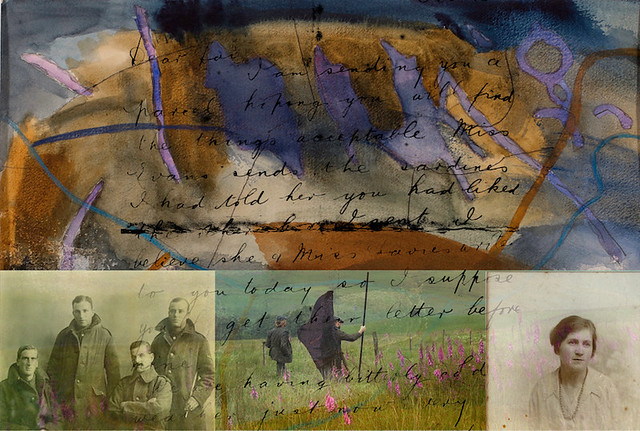 Audio-visual work by a number of South and West Wales based artists exploring recently discovered personal family histories connected with voice/song. The artists’ have all (re)connected with a family member, living, dead, met and not met through an inquiry that started from a stumbled upon object, family heirloom or conversation. With this work the artists both archive and bring to the present the details of significant family events, routine activities and synchronicities across the generations, deepening personal connections and family relationships and drawing attention to their own sense of mortality and identity.

It all started with a discovery of a handbag containing pencil written letters from Sianed’s great aunt Dilys writing to her brothers in the trenches of WW1; a correspondence with a mystery Mr J.R.Owen from Machynlleth; a gift of a Swyn; a charm of protection; a story of Sianed’s grandfather and great Uncle as young lads, walking from village to village around Devils Bridge carrying a harp on their backs; a series of live video/sonic/visual improvisations rooted in the healing powers of a circle. Cân Elenydd weaves all these stories and improvisations together. http://www.sianed.co.uk      http://www.jacobwhittaker.co.uk   http://www.mariahayes.info       http://www.marylloydjones.co.uk

17m:19s:00f by Jon Rattigan a video piece I made during a period of research on the duration, beginnings, ends and mid points of events.

The film’s split-screen form depicts the duration of my late father’s life, with each frame of video, projected at 25fps, representing a single day of his 72 years; on one side, aided by 2 time-codes, we see life progressing and on the other, we see it running out.

The seemingly abstract colour cycle on screen is actually made of extreme close-ups of his handed-down photographic darkroom equipment and on the sound track we hear his home-made photo-processing timing tape, as well as a little singing. The objects are arranged according to the way in which the Italian cinematographer Vittorio Storaro used colour to represent different periods of a life- birth, education, maturity etc., in the film The Last Emperor. www.jonratigan.com

‘In His Heels’ by Johanna Hartwig

After my Grandmother died we found some old 78 records in her house, including a recording by my Great Grandfather, a Cantor (singer/leader in religious song and prayer) from Czechoslovakia. One song stood out. Google translated the song title from Hebrew as ‘In His Heels. After squashing this big voice into a digital file, it felt as though it should be let out, expanded again into a physical space and shared.  That same year I found out I had a cousin, Sion, living only a couple of miles away. Sion agreed to respond to the recording using our voices and acoustic instruments that we could both play to some degree or other. The people who contributed to this track – Leon, Si, Adam, Thomas are part of the story too, a continuation. In the making of it there were found sticks in place of misplaced brushes, shared parallel histories and a friend that turned up at the right time to help make this. www.johanahartwig.co.uk 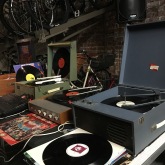 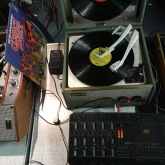 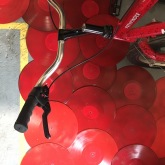 Many thanks to all the visitors to the installation at Punk Bikes in Cardiff last month.  Working together to create a musical soviet using a collection of themed vinyl records and found audio equipment, we covered and combined a range of musical genres and created a great deal of red noise!
The images below show a few of the visitors exploring the collection, you can listen to and download the full audio files through the links at the bottom of this post. 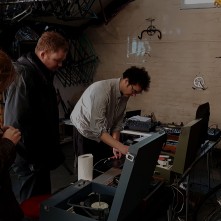 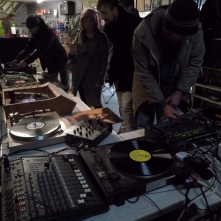 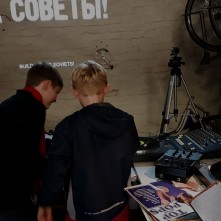 Visitors were introduced to the collection of old audio equipment and record players – a Dansette tempo found on the road in Carmarthen; an old Ultra from an attic near Carmarthen; a BSR from a recycling centre in Devon; a vintage Bush from a boot sale near Aberporth – all output into a Yamaha compact cassette 4 track from a distant teenage friend.  The 4 track then outputs to a battered Roclab 4 channel mixer (found in a skip in Bristol), along with a Sony PS-212A (given by a friend) and a Pioneer PL-111Z turntable (found on the street) running through a Numark 2 channel mixer (exchanged for a website). An old Sony PS-212 (with its own idea of what 33 or 45 is) and a vintage Technics SL-Q2 took the other channels.

The box of records was selected from a database of over 4000 by searching for the terms Soviet, Russian, and Revolution (and also included some Punk and protest song records).  These were available to choose from and to play in any way visitors wished.

Many of the record players had the tone arms tied with bits of wire so they found a loop point, the Sony PS-212A played normally and the Pioneer PL-111Z played backwards. 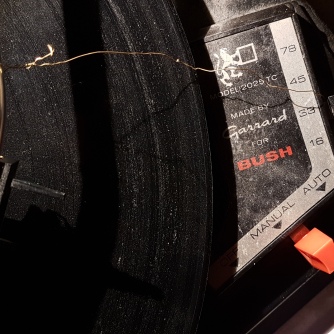 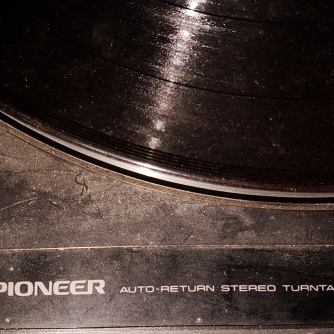 Part of the installation was this fragmented red record with QR codes.  Scan the codes to access a set of recordings of soviet era russian records!

Sound objects in red theme for the centenary of the October revolution.
The reds are heading to a new installation in the garden of No28 Ninian rd with Rhôd and madeinroath. 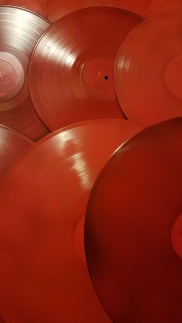 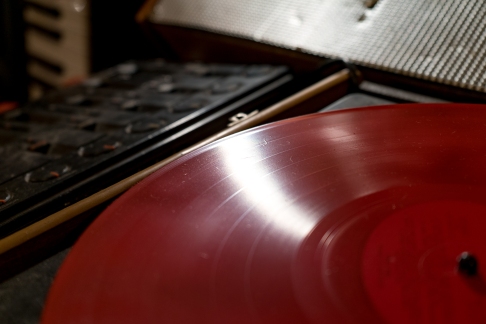 The work for Rhôd in Roath 2017 will explore the collection through a red filter, gathering and ignoring eclectic musical references to popular culture and radiating red noise.

Looking through my vinyl record database for red I find these… 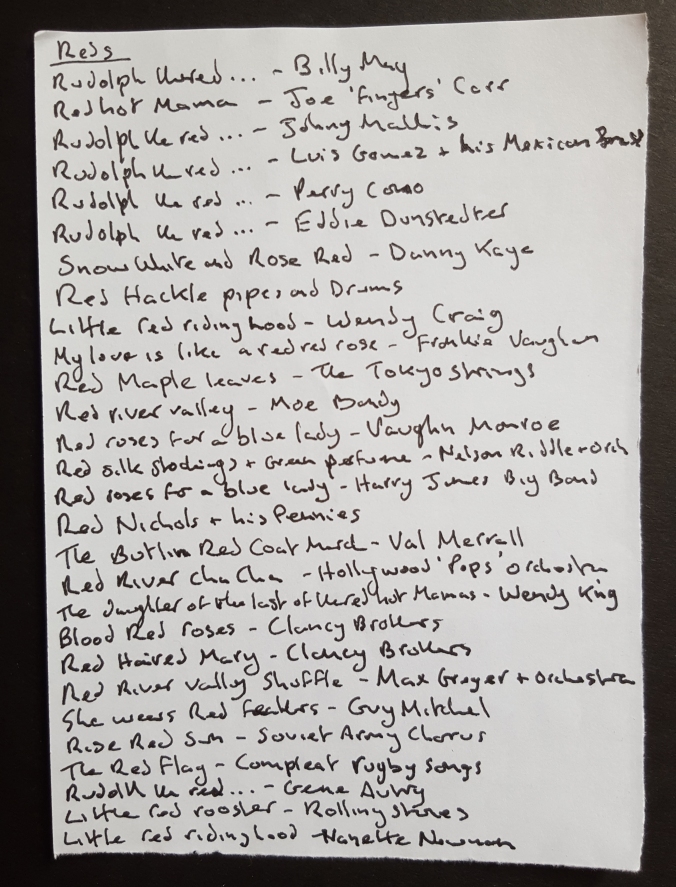 Finding the actual records in the collection is a lot harder than in the database…. 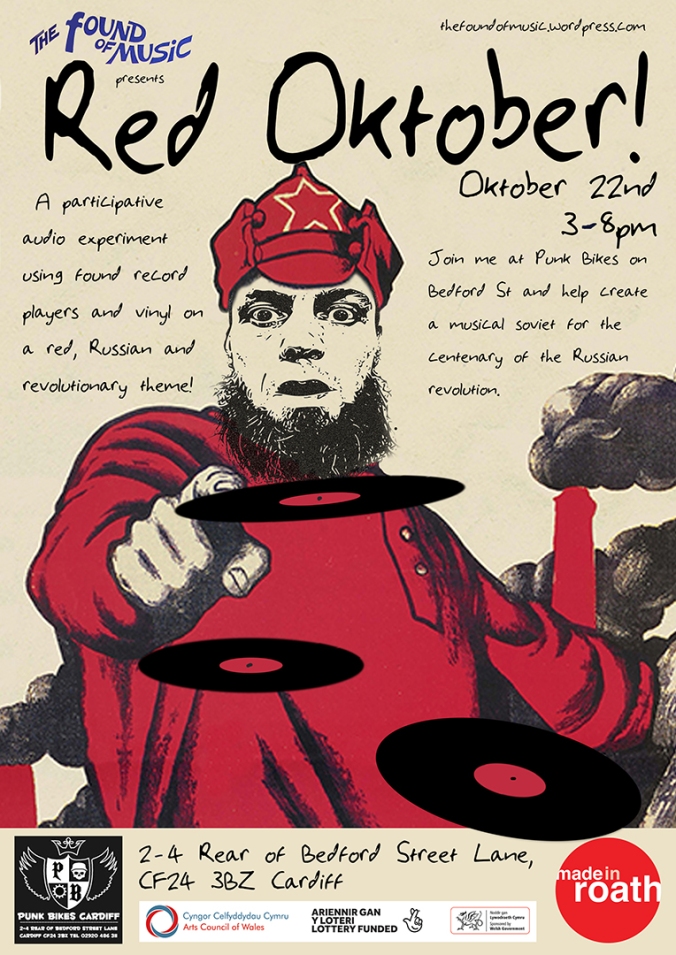